For today’s update post I’d like to go back to the kind of “traditional” update style of my first update posts. So I’ll choose a few topics and give you a little update on those!

I’ve shared a little bit about the app I’m currently working on, but I haven’t said many concrete things about it. Today I’d like to go all open by telling you what kind of app it is and how you could help in its development.

So, the current working title is “ReList” which comes from “Reusable Lists”. It’s not fixed yet, but so far I haven’t had any better ideas for the name. My thought was that sometimes you have a checklist that you’d like to go through many times. Examples would be a morning and evening routine, packing lists for traveling, or project templates. Besides the routines, I personally also use it to prepare a new beta for the app itself. On there are things like “Archive build in Xcode” or “Write build notes” and lastly “Post a message in beta group”. Although it’s just six steps (at the moment), it’s helpful so that I don’t forget anything. You can either manually invoke these checklists, or configure repeating checklists that are created automatically. Of course you can use it as a regular checklist app for groceries and stuff as well.

Originally, I got the idea for the app from CGP Grey, a YouTuber and podcaster. In one of the Cortex episodes, he talked about templates for checklists that he’s using whenever he prepares to post a new video or podcast episode. And because I couldn’t find a good app that does ONLY this, and among the well known task managers, only the more expensive ones have this feature, I decided that it would be nice to make my own app for it.

I’ve mentioned the beta for this app. I started development in the beginning of January and on 21 January I got the app through Apple’s beta review and officially started the TestFlight beta. I’ve also made a separate page for it with more infos and current task lists and build notes. You can find the page here. If you’d like to participate in the beta, just send me your email address. ;) Currently, the progress has stagnated a bit, and the app is still far from release, but I’m hyped to work much more on it in March!

I think I’ve talked about this in a previous post once, but I’m picking it up again now. I’ve rediscovered a game that I made for iOS a few years ago by going through a tutorial and modifying everything. Last summer, I ported the whole thing from Objective-C to Swift, but then forgot about it again. Now I’ve dug it up once more and it still compiles easily without any issues. It is a Flappy Bird clone (yes I know…), but instead of a bird, we used a unicorn! My flatmate actually made all the artwork for it. And I really think I should finish this game and put it onto the App Store. It still needs a proper interface and better music, and maybe I’ll add some in-app purchases and leaderboards, but the basic gameplay is already done basically. What do you think? Here’s a screenshot: 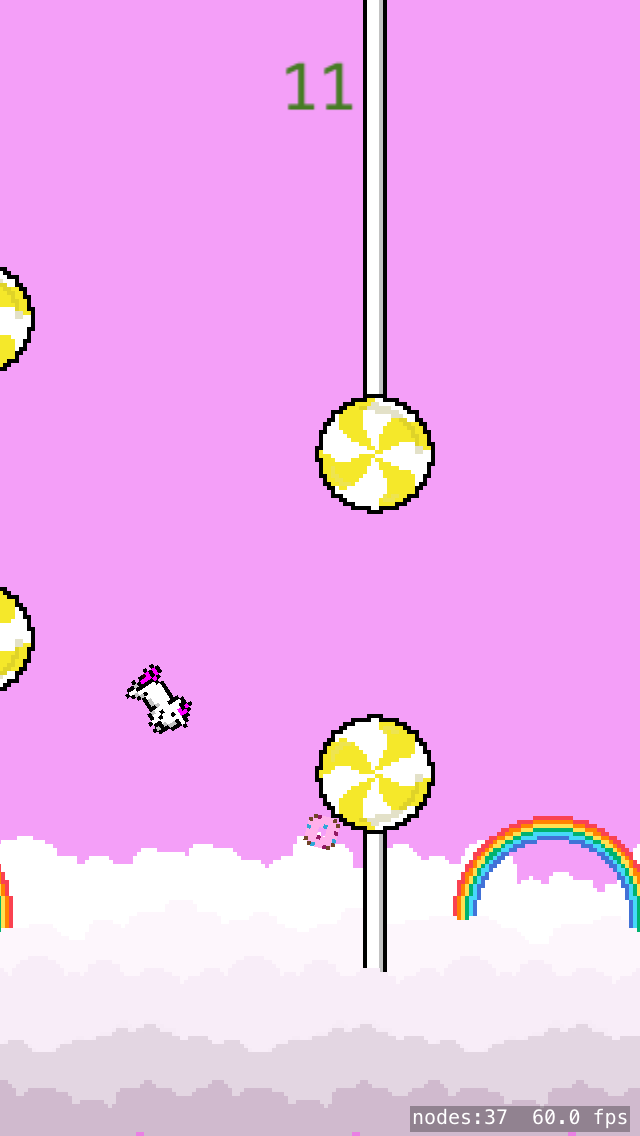 (That little thing under the lolli is a flying donut projectile that’ll kill you if you get hit by it. 😂)

Unfortunately, my progress in Japanese is stagnating a little bit. I’m still doing my daily reviews (never ever will I skip a day!), but I’ve had so much other stuff on my mind that I didn’t make much progress. Recently, I’ve started watching a show on Netflix called “Dad of Light” in Japanese with Japanese subtitles. Netflix is actually really nice for that, and if the show’s content is not too complex, I can understand the gist of most of it. “Good Morning Call” would be a great candidate for this as well, but I’m watching it with my flatmates, so we need the English subtitles. But I think that this is pretty good listening practice even if some stuff is getting lost. You are forced to focus on the Japanese and the subtitles help a lot because of the kanji (my kanji knowledge is far ahead of my speaking and listening abilities…). I hope I can use this to make some progress and maybe learn some new words as well. :)

Have you seen SpaceX’s Falcon Heavy launch? If not, where have you been??? I think it is a must watch for anyone! Elon Musk sent a frickin’ Tesla into space! (I know it’s basically trashing the universe, but at least it’s not in our atmosphere.) Here is the video of the launch. The launch itself is around 21:55, but even more important is the crazy landing of the two booster rockets around 29:55. You should definitely open that video even if just for that!

Since I haven’t prepared at all for this post to be honest, I’ll just put some stuff here that I found interesting lately.

If I searched more, I’d probably find a million more things I could put here, but I think this is enough for now. Let me know if you found some of the stuff as interesting as I did!

I noticed that I often have things I’d like to share and talk about, but I never use my blog for this kind of stuff (usually I just tweet it, but so few people are actually reading my tweets that those often get lost). So the next time I have a thought or an idea that I have stuff to say about, I’ll make a blog post out of it! That’s what a blog is for, isn’t it?

Please don't enter any personal information. All comments are public! You can edit or delete your comment within 15 minutes of submitting it.