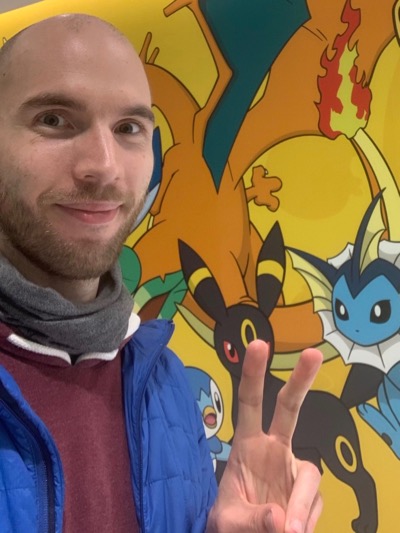 My name is Stefan Peters. I’m a software developer from Göttingen, Germany. I have a diverse set of hobbies, some of which I’d like to talk about here.

I’ve started coding in school on our TI-83 Plus graphing calculator with a BASIC-like programming language. I did some summer courses in PHP and Java, and we had one semester of Delphi programming in 10th grade (unfortunately, this was the only computer science related thing we had at our school). It was always fun for me and I learned quickly, but I never spent too much of my free time on it. I still decided to go to university for it because I knew I wanted to do “something with computers”. Turns out there wasn’t actually much coding in the curriculum. I still continued my journey, learning Python on the way, and accepting a student job where my coding skills were also needed. For quite a while now, I’ve wanted to dive into app development, but I always had some excuse not to commit myself to it. But this has changed.

In October 2017, I’ve decided that this is my chance to build a new foundation for my future, so I started working my way through Apple’s book “App Development with Swift”, and in December 2017, I finally released my first app on the App Store. Now, I’m deep into developing my second app. More information on that soon!

I’m hoping that this effort in learning iOS programming will bring me opportunities for jobs in the field, and at some point in the future, might lead to self-employment. I have no specific plans yet though, so I’ll see where it takes me!

As a child, I loved watching anime on German television. At some point, Naruto came to German TV, and I got hooked so much that I couldn’t wait for more episodes to be dubbed, so I started watching the English dub. But those were limited as well, so I started watching the original in Japan with English subtitles. That was the start of me getting into Japan and Japanese language and culture. It also improved my English A LOT. I eventually stopped watching Naruto, but instead watched tons of other anime, most of which were only available in Japanese anyway. I also started to learn Japanese on my own, but that didn’t go very far.

After school, I had the plan to go to Japan for a working holiday year, but I couldn’t go mostly because of financial problems. I moved to Göttingen with two of my friends to start university. There, I took Japanese classes in addition to all my other classes and finally got a bit further into studying Japanese. But after three semesters, I was done with the highest level my university had to offer, and my motivation kind of plummeted. But I still had the dream of going to Japan one day. In fall 2015, I finally decided to apply for an exchange semester in Japan, and I was accepted! So in September 2016, my dream came true. I spent almost seven months in Japan, and it was the best time of my life so far. I met so many great people, had so many fun and interesting adventures, and worked hard on my Japanese studies. Apparently, this was what I needed to finally get serious about this.

After coming back to Germany, I continued to study every day, and I still do it to this day. The amount of studying I do varies and goes up and down in phases, but I never skipped a single day of reviews. And one day, I will go back to Japan to REALLY learn the language by immersing myself into the culture. It might take a while until I can do it, but for me this plan is fixed and I’ll do whatever it takes to get there!

A few years ago, I discovered bouldering here in a climbing gym in Göttingen. My friends and I got into it pretty quickly and it became a regular hobby for us. In February 2016, I finally started lead climbing which clicked even more with me. My friend and I went crazy and climbed at least three times a week for about half a year. The timing was a bit unfortunate because that was when I went to Japan for the exchange semester, but after coming back, I got back into it, although not as much as before. Right now (January 2018), I’m back at climbing two to three times per week and I’m almost back at my pre-Japan level. I really enjoy climbing. I love to get into the flow of climbing long routes. And it’s also a really balanced partner sport because you have to take breaks from climbing to belay your partner. We are usually climbing two or three routes per set and then switch, it works very well for us. Climbing is definitely my go-to sport and hopefully it will stay that way for a while.

At some point, I became obsessed with watching vloggers like Casey Neistat on YouTube, and I really wanted to do that as well. It never really worked out, but I had some phases of vlogging and I think they weren’t too bad for a beginner. I haven’t uploaded a video in a while, but if you’re interested, you can visit my channel here.

I also enjoy juggling and unicycling (there was a time when I was REALLY into these), watching movies and TV shows, reading books, listening to podcasts, and occasionally playing video games (I was really into video games as a teenager).